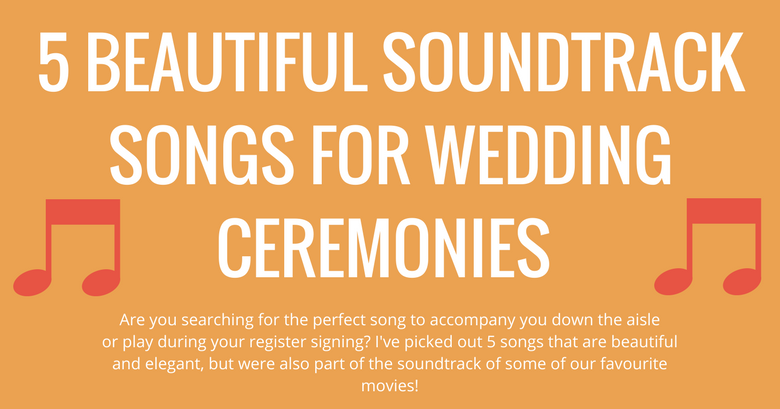 Whether it’s for walking down the aisle or during the signing of the register, it’s important that the songs you choose for your ceremony mean something to you. If you and your partner are movie buffs like Chris and me, you might like to choose a song from a film that you have watched together, or use a number of movie wedding songs throughout your big day.

You probably want the film songs for your wedding to be a bit subtle — striding down the aisle to Ghostbusters might distract your guests and take the attention off you somewhat (unless it’s a themed wedding and you’re donning a proton pack, in which case it’s probably perfect).

I’ve compiled a list of some beautiful and perhaps less-well-known wedding soundtrack songs that would be sure to get your guests saying, “That song was lovely. I recognised it — but what was it from?”

I’m sure you will recognise this one as it is an absolute classic, but you might not have remembered it was from Forrest Gump. It is another really beautiful song and it’s also ideal as a movie wedding song if you have a pianist for your ceremony. I’ve included a video of a piano cover below so you can get the idea of what it might sound like.

This song will probably be familiar to you because it’s a cover of a Smiths song. I know a lot of people who have considered having a Smiths song feature in their wedding but decided against it because they all sound “a bit too depressing”. Well, if you’re a Smiths fan, then this is the perfect alternative. It’s a really beautiful version, and it features in Ferris Bueller’s Day Off, which is an absolute classic — so 80s fans may also like to consider this one as part of their wedding soundtrack songs.

Not many films make me cry, but I’m pretty sure when I first saw Up at the cinema, this scene had me welling up — it still gets me, even now. The scene is all about the little moments that sum up a marriage, and the song that accompanies it is called Married Life, so it’s definitely fitting for wedding film songs. It’s such a pretty theme, and it always makes me think of all of the lovely parts of marriage that we usually take for granted. The song starts at 0:15.

Lord Of The Rings — Concerning Hobbits

I’m a big LOTR fan, and I’ve always thought that this particular song has such a warm and happy feel to it — perfect for a celebration and a great choice for wedding soundtrack songs! Here’s a beautiful violin cover I found:

Wes Anderson is pretty well-known for his unusual soundtrack song choices, and this one is no different. If you’re a bit quirky, then this might be the one for you. The song kicks in at about 0:30.

So there we have it, five beautiful soundtrack songs! What do you think of our choices? Do you have any other suggestions for wedding soundtrack songs that would be good for a ceremony? We’d love to hear them!

If you want a live band to play your first dance songs for you, rather than just listening to the original record, you’ll need to get hunting. Get in touch with us now and we’ll help you find your perfect wedding band.