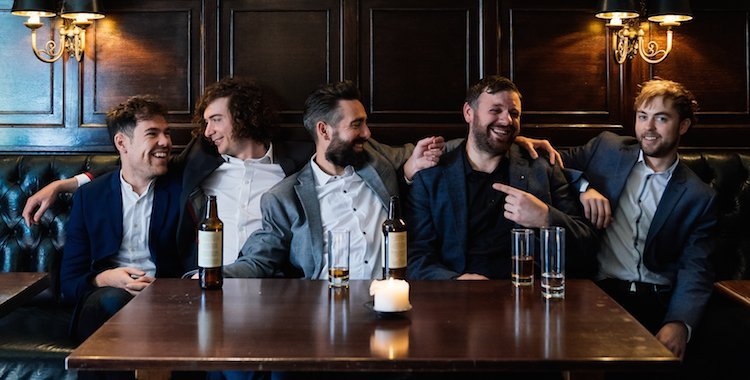 Hampshire based Wedding band Mister Kanish have been playing and making music together since 2006. That's loads of time gigging together, rehearsing together, touring together and even living together and due to this they are perfectly in tune with each other musically and so make for the best entertainment for any wedding or party.

They are our resident house band and Chris from The Band Boutique plays bass. They have over 3million hits on youtube, tons of 5 star reviews on Facebook, and even won a French X-Factor style TV show which brought bands from all over the world to compete.

They provide the kind of entertainment that leaves everyone from the youngest kids to the senior citizens of the parade with huge grins on their faces, feverishly demanding “MORE!!!” As 5 friends with so many shared experiences they have crazy amounts of fun playing together, and their audiences can't help but feel part of the action. They are happy and able to play anywhere in the world.

They have provided the soundtrack to friendships old and new. They've played gentle acoustic sets at 3pm surrounded by serene Welsh hills. They've played 21st birthday parties where the host has drunkenly demanded an extra set at 3am, and the stage is drenched in booze.

The band were innovators of the mumford and sons style vintage wedding band. Check out their alternative band Classic Kanish if you are after something a bit different.

As standard the band offer a line-up of 2 guitars, bass, drums and vocals but if you want something really show stopping then check out their ten-piece with horns and additional vocals.

The band have played countless first dances, each one a special memory. Those when the bride and groom have secretly rehearsed for weeks, performing majestically as one with the band leaving everyone astounded – fathers clasping hands and mothers crying tears of joy. Then there's those when the groom furiously beckons all his mates to join him on stage just after the intro. They've played Sunday afternoon river cruises on the Thames, flanked by tranquil Oxfordshire countryside. They've played Saturday nights in pubs where the revelry is so intense, and so much flesh is visible on the dance floor, that bouncers have had to intervene. All the while the band plays on. Mister Kanish always deliver, whatever the time or place.

The boys in Mister Kanish have all played in other wedding bands. The ones where members are in and out like ships in the night. The ones where you're told your band name on the night. It's nice to be spontaneous, it might even be “tight”, but there is rarely a vibe. When Mister Kanish perform, you'll be feeling the vibes. Everyone at your party will feel the vibes, for hours, weeks, even months... Vibes that only come from years of rehearsing and playing together. Vibes that come from each member of the band knowing what the other guys are going to do next. Mister Kanish roll seamlessly from one awesome tune to another, always playing off the audience, always eager to keep the party going and the dance floor packed.

The Mister Kanish lineup of vocals, dual guitars, bass and drums gives a pure, live, energetic, rocking sound. What you don't get from Mister Kanish is anything fake – no cheesy strings, no synth brass, and never any pre-recorded backing tracks. What you see is what you get – highly talented musicians playing fully pro instruments and equipment, covering songs from the 50s to today with their own style and sound. Even if they play a song note for note, down to the last semiquaver in the last bar of the guitar solo, they will always sound like Mister Kanish.

The repertoire is mostly comprised of rock and pop, rather than funk, soul, or Motown. Mister Kanish are never likely to play “We Are Family”, “Celebrate” or “Car Wash”. There are hundreds of bands out there who will play that stuff and if that's what you're after, fair enough. They know from hundreds of gigs experience that their repertoire will keep the dance floor rammed.

The guys in Mister Kanish have a great time doing what they do best, but they're not just about providing first class entertainment at weddings, parties and corporate events. They are all professional musicians, whose talents have led to many exciting ventures. The boys have shared stages with rock legends such as Roger Daltrey and Status Quo, plus Paul Gilbert (guitar god) and Tony Levin (bass behemoth). They have provided the musical backdrop to fresh-faced popsters James Bourne of Busted, Gareth Gates and Lil' Chris. They have played at major festivals including The Big Chill, Bestival and Wilderness. Guitarists Andy and Ollie were both part of the Original London West End Cast of Loserville the Musical.

The boys are based all over the south east and come together every weekend to perform at weddings across the UK. Their base location is Hampshire which sees them perfectly located for weddings and events in Surrey, Oxford, Dorset, Berkshire and Sussex. They have played hundreds of the UK's best wedding venues including - The Ritz in London, The Tithe Barn and Clock Barn in Hampshire, Hyde Park in London, Hedsor House, The Savoy and more.

We booked Mister Kanish to play their classic, folky style at our wedding in May 2017. It’s fair to say they were simply amazing and without a doubt the highlight of the entire day. People never left the dance floor and the guys are first to be mentioned when we chat to anyone about our wedding. Everything was flawless from booking to tailoring the music to the crowd, learning our first dance & throwing in some 90s rap in between songs! Cannot recommend highly enough and wish we had another occasion to book them for. Thanks, Louise & Dave – Wedding, May 2017

Hi Chris, I’d like to say a big thank you for yesterday you made our day very special and you were amazing, all the guests couldn’t stop talking about you. Thanks for making our day even more special Sarah and Lawrence – Wedding, March 2017

Hi Chris, Sorry for not getting back to you sooner. We cannot thank you enough for not only playing at our wedding, but helping to make the day truly memorable. We absolutely loved your unique take on well-known songs, and even going the extra mile with requests that you may not have been familiar with. Definitely above and beyond!!! Once again, thank you so much. All the best, Adam and Vicky – Wedding, January 2017

Hope you got back ok on Saturday night. Firstly I’m so sorry that Saturday was so stressful for you all! ( Chris – I was hit by a moped travelling between the ceremony and evening party!!) We hope you got your dinner ok, and that your journey home was hiccup free. I also hope that in the middle of the stress you got to have some fun. I mean – you had a crowd dancing for the sound check – I’m guessing not every wedding is quite like that, you should consider that a credit to your sound checking skills. Secondly – our wildly drunken friends were incredibly impressed and had a great time dancing to you, you were brilliant. You literally made the day. In some ways I wish they were a little bit less mainstream and then we could have rocked out to some cheesy metal all night. I can’t think how we can justify hiring you again, but I’ll start thinking on it! Thanks again, Gemma and Keith – Wedding, November 2016

Hi Chris, A massive thank you again for Saturday. The band was fantastic & having them their throughout our wedding really made our day & provided the perfect atmosphere. Nothing was too much trouble. I’d also like to thank them for their flexibility as the weather was slightly unpredictable! The comments and compliments from our guests have been incredible, a real credit to the band. I’m sure they will be talking about it again & again for weeks to come. We will email you some photos once the photographer has sent them across. Regards, Matt and Ange – Wedding, October 2016

We just wanted to say a big massive thank you for performing at our wedding last weekend!! You guys were absolutely awesome!! Everyone of our guests have been raving about you guys since – you had us all on the dance floor all night!! We loved the selection of music you all played and absolutely loved the version of “use somebody” that you performed for us during our first dance!! We wouldn’t hesitate recommending you to anybody. We wana do it all again! Ha! We truly had the most unforgettable day ever and you guys were a massive part of that! Thank you so much – you guys rock the most!! Is there an address you could provide us so we can send you a proper thank you card? Hope you didn’t think the welsh were too crazy tee hee! Thank you again Mr Kanish! Absolutely outstanding! Best wishes Mr and Mrs Offside – Wedding Sept 2014

Hi I was one of the guests at the Birmingham wedding for Tris and Rachel. You were superb and it’s the first and probably the last time I ever dance to Craig David and the Spice Girls. You made two dreadful songs sound so good!! Thanks Andy – Wedding Guest – August 2014

We are finally back to reality after a whirlwind couple of months, and wanted to say a MASSIVE thank you for rocking our wedding back in May. You were absolutely awesome from start to finish, which was reflected in the jam packed dance floor all night. Steve and I had decided from the beginning that our wedding band would be one of the most important aspects of our wedding day, and we are in no doubt that we made the perfect choice. You were more than helpful in the run up to the wedding, in particular allowing us to organise our best mans involvement in playing along to the first dance – something that meant a lot to us. You were also professional and friendly on the day, as well as very patient with the numerous guests who decided they wanted to be a part of the band! Steve in particular would like to say a huge thank you for allowing him to play the drums at his wedding, something he has always wanted to do. We have had so many amazing comments from our guests on how good you guys were. You played a range of songs to suit everyone and no one was left disappointed (especially my Dad, who was transported back to his youth head banging to T Rex). Of course all this did pose the problem of leaving the dance floor to speak to our evening guests (which we severely struggled with). Thanks again and rest assured we will be recommending you to anyone and everyone who will listen – in fact a couple I am bridesmaid for loved you so much they have booked you for their wedding next April, so see you on the dance floor! Love and best wishes – Kayleigh and Steve – Wedding May 2014