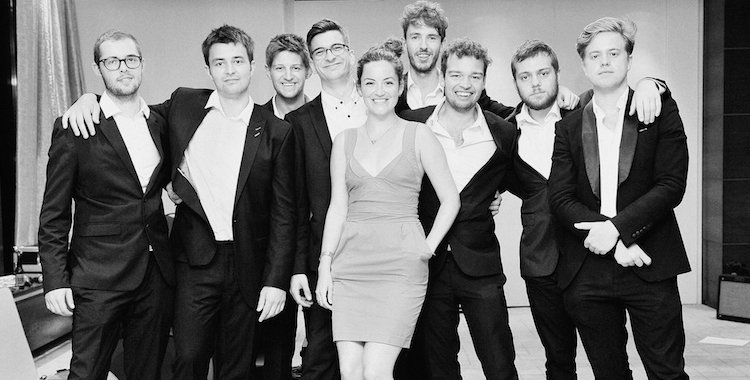 The Examples are one of the most exciting party, wedding, and function bands in London and the UK. They offer a 9-piece line-up including a male and female singer, brass section and full rhythm section. They play a great mix of tunes from disco and funk classics such as Earth Wind & Fire, Michael Jackson and Stevie Wonder all the way to modern hits including Bruno Mars, Beyonce and Katy Perry, regardless of age The Examples will keep your guests dancing. The band can also offer a 6-piece band for smaller events.

With their breathtaking performances, and abundance of charisma, it is no wonder The Examples are one of the nation's most in demand function bands. The Examples are guaranteed to have everyone up and dancing!

The band pride themselves on playing electrifying arrangements of current music, as well as a wide and varied selection of absolute hits with a hit of real brass that other bands lack.

As well as being one of the most in demand bands on the scene, The Examples band consists of musicians that individually have glistening portfolio careers. They have a wealth of experience playing high profile gigs with highly acclaimed artists, including Jamie Cullum, Kylie Mynogue, Blue, Peter Andre, Plan B, Gregory Porter, The Saturdays, Sophie Ellis Bextor, Jools Holland, Goldie, Bashy, Il Divo and have performed in West End shows including ‘Wicked’, ‘The Lion King’ and 'The Jersey Boys'.

Collectively the band has performed at a variety of high profile venues in and around London, including: The O2, The Royal Albert Hall, Queen Elizabeth Hall, Glastonbury Festival, KoKo’s, Ronnie Scott’s Jazz Club, Ministry of Sound, Radio 1 Big Weekender, Dover Street Arts Club, Camden Roundhouse, The Groucho Club and the 606 club. In addition to this, members have performed on major TV networks including BBC and ITV, and have had numerous BBC radio plays.

They are ideally suited to play weddings and events throughout the South so get in touch using the contact form below.

The Examples played one of our featured weddings - check it out here.

To read up up on a real wedding where The Examples featured go to our blog here.

We highly recommend the band as they made my 50th birthday and my wedding very special and truly memorable. - Jonathan Berney and Beverley Goldberg. - Wedding

We just wanted to say a massive thanks for Saturday - It was absolutely fantastic and everybody was commenting on how good the band was. Hope you guys enjoyed it! - Charlotte and Mike - Wedding

We wanted to write straight away to thank you for being wonderful on Saturday evening. I am sure that Chloe and Ed will also contact you once they are back from honeymoon.
We really appreciated the quiet way you arrived and set up, making sure you were ready in time for the speeches. As soon as you started playing we knew that we were in safe hands.
It was wonderful to see everyone on the dance floor and joining in - even Paul who never dances! Everyone really loved that you got involved in the middle of the dance floor. It was a great way to celebrate the joining of Chloe and Ed. Thank you for being part of our magical day. - Anne and Paul White - Wedding - Barkham Village Hall - Berkshire

The band are fantastic and know how to keep a party going. Be it modern hits or classic Motown they've got everyone's music tastes covered. - Sam and Roberta - Wedding

We would both like to thank you for providing such an amazing night of entertainment and superb music. It really made our wedding reception such a memorable experience and everyone of our guests said how amazing you were. We are so pleased that we found you! - James and Ian - Wedding, Hampshire.