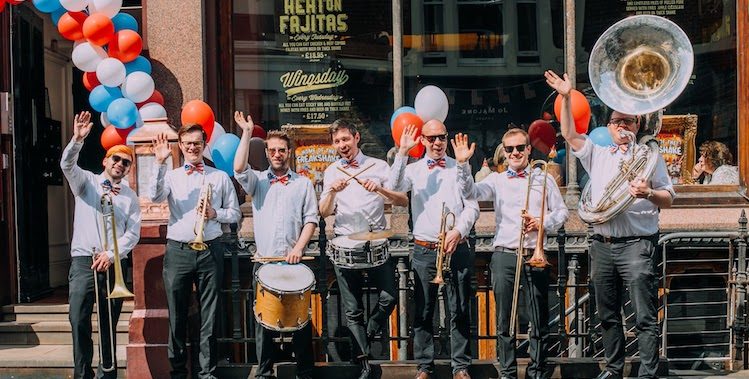 With sousaphone, trombone, trumpet, saxophone, drums and optional female vocalist, the London based Big 6 Brass Band fuses the foot tapping feel of a New Orleans street band with some of the most popular chart hits from the 20th and 21st century. They offer a refreshing alternative to the traditional wedding or party band. They offer ideal musical entertainment for any event that wants something a bit different. Perfect for wedding and drinks receptions, corporate events and parties. The band are great for either background music or dancing. They can also offer wandering performances akin to a marching band.

Bringing together musicians with a wealth of experience from a wide range of genres, Big 6 Brass Band is cooking on gas. Their sole mission is to entertain you and your guests!

The band is a refreshing alternative to your traditional party band. They will add a unique touch to your event. They create alternative renditions of modern pop songs with a few classics thrown in and their music is perfect for dancing. In addition to the modern repertoire, this versatile ensemble can also perform traditional New Orleans instrumental music for a lighter situation such as a drinks reception or during a meal.

The musicians are based in and around London. Let us know where you are having your wedding or party and we will organise a quote including all travel costs. The band regularly travel to Essex, Surrey, Hampshire, Oxfordshire, Kent, and beyond.

People often book this band for their weddings. There are 3 different times that they are booked most regularly.

The act can also offer some oompah band numbers for Oktoberfest style events.

Thank you again for playing at our wedding. All the guests absolutely loved you guys and it really brought something special to the day - Ken, May 2018

The band were the talk of the wedding reception! Months later, friends are still raving about them. They added a fun, unique edge to the festivities and got the whole party dancing. Amazingly, they were sweet enough to learn and play a particular song that was special to me and my friends, after I contacted them to see if it would be possible. Thanks so much for making our day even more memorable, we had the best time! - Cat, April 2018

Thank you so much! Everybody loved you, [and] we received huge compliments about how good you were. - Jamie, April 2018

This group were amazing - everyone raved about them and they added that something special to our cocktail reception. Weddings sometimes can take a slightly sober turn whilst the bride and groom are being photographed but with Big 6 Brass entertaining our guests, this was not the case. The atmosphere was buzzing and all of our guests were tapping their feet along to the music. It was absolutely perfect and our day wouldn't have been as special without them. - Gemma Haley, December 2017

We were really happy with you guys on the night, it was exactly what we needed to refocus people after we had some issues with the meal. Everyone commented on the band, it was one of the highlights of the day for our guests. Thanks for being flexible with the last minute playing arrangements also, we would certainly recommend you to friends. Eoin, Married May 2017.

The band were sensational. Their high levels of energy and outstanding musicality created the perfect party atmosphere. Thank you so much! Mr & Mrs Pearkes July 2014 Private Residence.

Thank you once again for such wonderful entertainment last Saturday. Many of our guests are still talking about what a great time they had. We hope to be able to see you again soon! Sally Logan May 2014 Strawberry Hill House, London.