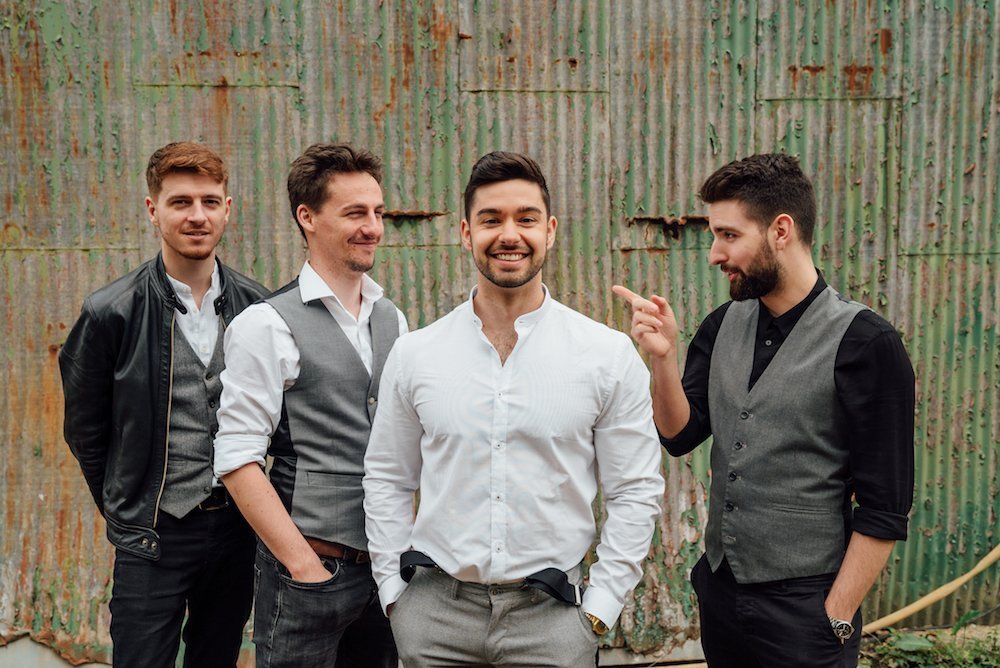 If you are looking for a high quality, but affordable folk / Mumford and Sons style band, then you won’t find better than The Lion Men!  The band, who are based between Sussex and London, play two styles of music - both of which are ideal for keeping all of your guests happy and dancing all night long. Their folk set is inspired by artists such as Mumford and Sons, George Ezra and The Lumineers. They offer upbeat arrangements of popular songs, played in that recognisable folk style - think Living On A Prayer played by James Bay or Rhianna played by Mumford and Sons.

The band offer their folkier set to start which is great to ease your guests in, and get them ready to really party for what comes next - their electric set! This is where the band replace their acoustics and double bass for electric guitars. They play all the familiar classics and modern rock and pop chart hits and are sure to get everyone on the dance floor!

The Lion Men are a 4 piece band comprised of a very talented group of musicians. Hailing from the South Coast; Chris (singer/guitar), Chris (lead guitar), Will (bass) and Sam (drums) have spent many years playing in professional function bands and tribute acts around the world at festivals, on cruises and at weddings and corporate events. They are based predominantly in Brighton, Sussex but are happy to travel throughout the UK for weddings and parties.

Sussex and London Based Wedding Band

Two members are based near London and another two in Brighton, Sussex and as such the guys are perfectly situated for weddings and parties all over the south. They've played some of Sussex's best wedding venues including...

Get in touch to find out how much they'll cost to play your wedding or event.

The Lion Men were fantastic to listen to! Everyone loved their style of music and they are very talented! The band were very accommodating and flexible during covid times. We had to change our set times last minute due to restrictions, but Chris was excellent in communicating with us and finding solutions. He managed to get Dan to fill in last minute who went out of his way to learn all our favourite songs! And honestly he did a cracking job and has an amazing voice! We really appreciate all of your hard work in making our day special 🙂 We would love to see the Lion Men play again in the future and wish them all the best! - Booked for a wedding - 3rd July 2021

We booked The Lion Men through The Band Boutique for our wedding in October- and they were INCREDIBLE! We adored Chris (lead singer's) voice listening to their sample and they didn't disappoint. 100% of our guests were up and dancing, and we have had so many rave reviews since the day. Their cover of Everywhere by Fleetwood Mac for our first dance was just dreamy too. Chris (lead guitar) was so helpful over email in the run up to the day and they incorporated all our requests, the whole band were lovely on the night, turned up early for set up and were just a pleasure to have around. Literally can't rave enough, even a month on! Chris (from the Band Boutique) was helpful with our booking. We had lost/not received a few emails a couple of months out so got in touch via text and he was straight on the case for us which was great. Thanks so much for all your help 🙂 Would definitely recommend The Lion Men!!" - Sarah and James Married October 2018

We booked the Lion Men for our wedding and they were absolutely brilliant! They are great musicians, played the perfect set list and had the dancefloor full all night! We are so happy we booked them! The band and the band boutique were also great in answering our questions before the wedding which is a massive help when you have so much to do. Thank you! - Wedding 21st April 2018

"Thank you so much again for all your help - The Lion Men were brilliant 🙂 Thanks, Emma" - Wedding 25th February 2017