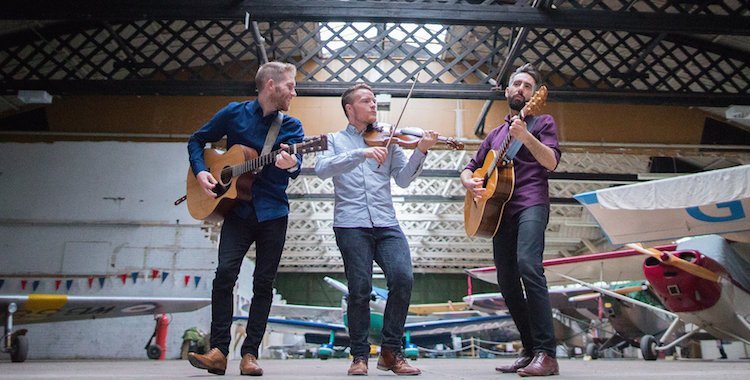 Fiddler's Elbow offer first class and unique wandering event entertainment. They are one of London's most unique and entertaining wandering trios. They can play anytime any place with their fully acoustic roaming sets filled with all your favourite classic tunes as well as current chart hits in their totally unique style. The band's line up features finely tuned 3 part vocal harmonies, acoustic guitars and their signature virtuosic fiddlin’.

It has become more common for London based venues to require entertainment to be fully acoustic with no no amplification. If your venue requires this then these guys are for you. With no need for a PA, Fiddler’s Elbow take no time to set up and can perform anywhere you need. They can roam around the guests at your event, entertaining them in small groups and playing requests.

Or if you really want them to fiddle the house down they can rock up with a PA and really get the crowd going.

Fiddler's Elbow's highly experienced globetrotting band members have performed in 6 continents, and between them have racked up over 2 million youtube views. They’ve played everywhere from the French Alps to the Yasawa Islands in Fiji, from Blackpool to Bournemouth and have graced the stages of such prestigious venues as the Royal Albert Hall, Shakespeare’s Globe, Walt Disney Hall (LA) and Carnegie Hall (NYC).

The members work in other high quality function bands including our very own house band Mister Kanish. Between them they have played over a thousand events including high end functions, weddings, festivals and private events to tens of thousands of people all over the world.

Their corporate client list is almost too long to put down including Microsoft, Merrill Lynch Bank Of America, White Stuff, Holland and Barrett, and Amstel.

The band offer a standard service which is slightly different depending on the event. For most they include 2 x 45mins of fully acoustic roaming live music with arrival up to 1 hour before their first set. They can offer even more music and often play up to 3 x 40mins.

Get in touch using the form below to book.

The band's repertoire is massive and they are not averse to playing the odd request...